Looking back now, I think you knew all along that you would not survive.  All of the doctors and tests and procedures were, in reality, just a waste of time.  You begged me on several occasions to just take you home.  You said that you did not care if you only lived for two days if you could be home and surrounded by our grandchildren.  There was no possibility of taking you home then.  You were far too fragile and hooked up to too many machines.  But, my love, I wanted to bring you home!   The other part was that I wanted you to get well.  We, it seems, could not have both.

You endured the endless tests.  You accepted the needed surgery.  You had tubes and wires.  The machines were noisy and beeped endlessly.  A full night of sleep was just a wish.  Some of the staff were wonderful.  A few were horrible and cruel, and I would not stand for anyone treating you badly.  Not on my watch!  You were an honorable veteran and a man of immense dignity.  This in itself was an undignified process.  I would not allow them to diminish you in any way.

The tests went on.  The treatments went on.  They came and they went giving us updates on your situation.  Good news.  Bad news.  No news.  Let’s do this all again.  I know you were getting tired of the entire process as I could see it in your eyes.  Yet, you never complained, and we kept running toward our elusive goal of having you healed and home.  I was terrified and if you were too, you never told me.  I think that you had already resolved your fate and accepted it.  I could not.  I would not!

When there was a quiet moment, I always stood next to you.  You needed tender human touch and I just needed to touch you.  You grabbed my hand a looked at me with a look that I knew.  This was not going to be a lighthearted conversation and I believe it had been one you had in your head for weeks but dreaded having with me.

You started out saying “Baby” and took a deep breathe.  You told me again how differently we saw the world.  Me in rainbow colors.  You in black and white.  That was true and it made us better together.  I saw hope and possibilities.  You saw reality.  I took the risks.  You played it safe and logically.

You said that because I saw the world in colors that I also believed that you would kick this thing.  If there were a test or procedure offered that might bring you closer to going home healthy, then I was willing to take that risk.  You said that if there was a glimmer of hope offered that I would take the chance and hope that it helped to heal you.  You said that you had abided by my every wish and taken all of the chances that I had wanted.  You did it for me because you loved me and wanted me to not have any doubts or guilt that we missed any procure that may have saved you.  You did it all for me.  I had made all of the decisions for you up to this point and you appreciated it.  But then.

“Promise me,” you said.  “Promise me that I get to make the last decision.”  You said that if they told us that there was nothing more that they could do, then you got to make the last choice.    You wanted me to honor your choice and let you make it with no questions asked.  Your one and only choice was  when they told us they had reached the last of their option, that I would let you go.  “Promise me.  I have done all of this for you and you have to do this one thing for me.  Promise me, Baby.”  And I did.

Even as I made the promise, I did not think I would ever have to keep it.  I knew you would beat this.  You had to beat this.  We had to stay being US.

On that Saturday morning, we were ecstatic!  That was the day you were being listed on the National transplant registry and were officially “on the list”.  All we had to so was wait for another family to be devastated by the tragic death of their loved one with your blood type and we were off to surgery.  One week to ten days.  Not much more and we were on the road to recovery and eventually going home!  We had worked so hard to get to this day.  You had endured so much, and we knew there was so much more coming.  But going home was our prize and I get to have you for many more years.  We get to have US.   Then they came into your room.

New problems had come up and, in light of these, your body would not survive the transplants and they were not willing to risk the surgery and have you die on the operating table.  They were kind and gentle but clearly uncomfortable.  The doctor delivering the news to me could not even look me in my eyes.  No, no, no…. this is not right.  We just got on the transplant list this morning!  We are waiting for an organ donor and we are going to surgery.  You have this all wrong!  Please, God tell me they have it wrong!

Our family arrived.  I told then what had happened that morning.  We all held each other and cried and then they told me.  One by one they told me how you had conversations with each one of them.  You made them each promise too.  You made them promise to take care of me in your absence and then you told them about your final request and the promise you had me make.  You told each one the “She will not be able to do this. Promise me that you will help her keep this promise.  Promise you will help her to let me go.”

You were right   I would not have done it alone.  They promised and you would be proud to know that they kept that promise on that night.  Oh, my love, I did not want to keep this promise to you, but I understood. It was your life and finally you did get to choose.

They moved you over in the bed so that I could be next to you.  It would be our last time together and I knew it.  I was with you in your last moments.  I wanted the last words that you heard on this earth to be, “I love you with all of my heart and soul and want you to know that it was the honor of my life to be your wife”.

It was the hardest thing you ever asked me to do and it was torture.  But I had to honor your last wish and let you go.  In the end, you got to make the final choice, my love. 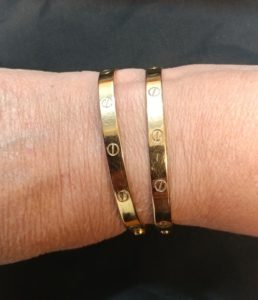